The 2020 Representative Cricket Game was a great showing with some exceptional young talent taking to the field.

ACC captain Claus Lotter had the team in the field and looking to get early wickets. A great early spell from Shiven Appasamy set the tone with an early wicket putting the State Schools under some pressure at 1 for 9. After the initial wicket, the State Schools put together a strong batting foundation largely due to a sensational century to number 3, Jake Egan. The innings was of high class and put the ACC bowlers under pressure with a wide range of stroke play.  Once the partnership was broken and to the credit of the bowling unit, they worked together making regular strikes to keep the State Schools innings within check. First change bowler Kaleb Smith bowled a good spell with (1 for 40 from 10 overs) and Johann Cloete (1 for 33 from 8 overs) also bowled well. The State Schools innings closing at 8 for 286.

The ACC got off to a shaky start in the first 20 overs with the team finding themselves in trouble at 4 for 54 due to some excellent bowling. The ACC needed a strong partnership if they were to get close in the run chase and a partnership between opener Douwtjie Hoogenboezam and Kyal Richardson suddenly gave momentum to the chase. A 90-run partnership at almost a run a ball blossomed the score in quick time and the ACC batting moved along to 4 for 144. Both young players displaying excellent technique and a range of strokes with one over including a pair of fours to Hoogenboezem followed by Richardson hitting a towering straight six. Unfortunately, just as the momentum was changing, the State Schools made some key breakthroughs in the final 15 overs including the key wicket of Hoogenboezem for a sensational knock of 86. The ACC innings closed at 7 for 177. 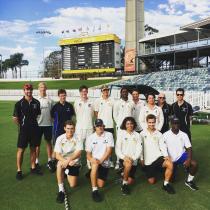 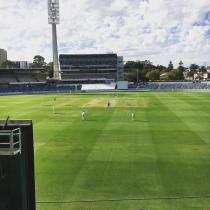