Congratulations to the ACC All Stars Netball team on their back to back win against SSWA on Friday 14th September 2018 at the State Netball Centre.

The girls were focussed from the start, maintaining their lead throughout the game with a final winning score of 42-21. Congratulations also to Ella Taylor on winning MVP on the day. 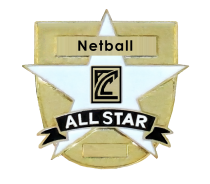 This is a great netball opportunity and all schools are encouraged to nominate quality players for these highly regarded games. All selected players receive an ACC netball warm-up top and an All Stars pin from the association.