Congratulations to all players and staff involved in the ACC v State Schools Representative Cricket Match at Murdoch University yesterday. It was a high-class showpiece game with plenty of talented young cricketers representing the association.

The game has a rich and proud history within the WA cricket community and both teams were stacked with some of the best underage cricketing talent in WA. The game certainly lived up to the hype with both teams enjoying the hard-fought contest across the day between bat and ball.

ACC Captain Corey Wasley (Tranby) lost the coin toss and was immediately sent into bat by the State Schools captain on what looked like a green wicket. The ACC batting got off to a steady start by openers Tyrone Virgo (Chisholm) and Jake Gerrans (Prendiville) compiling 30 runs without loss. The wicket of Virgo brought Corey Wasley to the crease and the ACC captain immediately set about playing a defining innings. Wasley was particularly aggressive early against the spinners and shifted the momentum of the batting by putting enormous pressure on the State School bowling via back to back sixes against the spin. A large match defining partnership of 115 runs formed between Gerrans and Wasley that drove the ACC into a very strong batting position. Gerrans was like a rock in defense making a composed 56, whilst Wasley continued to attack on any loose bowling that was pushing the out field right back to the boundary and beyond. Wasley eventually dismissed for a fantastic century, 114 runs off only 84 balls. The knock included 10 sixes and was destructive in all facets as the captain put his stamp on the contest. After Wasley’s dismissal, the State Schools bowling tightened in the final 15 overs. Handy late innings knocks from Jonah Lincoln (Bunbury Grammar) 31 runs, and late hitting from Blake Holly (Mater Dei) and Riley Neill (Guildford Grammar) helping the ACC post a very competitive 7/240 from the 50 overs.

The scene was set for the State Schools run chase and a steady opening partnership laid a solid platform. With the run chase looking ominous at 0/49, it took a great piece of bowling from first change quick bowler William Stacy (John XXIII) who managed to find a little bit of extra bounce to square up the batsman catching the shoulder blade of the bat with the catch taken at point. Leg spinner Virgo was operating in tandem with Stacy, and he was quick to follow up the Stacy breakthrough with another wicket which significantly set the run chase back at 2/53. By the time Virgo had his 2nd wicket of the match (a great catch by wicket keeper Lachlan Dargie from John Septimus Roe), the ACC had taken control with the ball at the drinks break with the State Schools 3/65. A couple of middle order partnerships then developed by the State Schools that slowly but surely edged them toward the target. At 5 for 164 with 15 overs remaining it was effectively tightening right up and game on. A key bowling partnership then formed between Stacy who come back into the attack bowling pace down breeze, and captain Wasley bowling spin. Stacy taking two more key middle order wickets that severely halted the run chase. Wasley tempting the lower order batters who needed to hit boundaries to stay up with the required run rate and in doing so induced a couple of wickets from great out field catches Blake Holly (Mater Dei) and Nico Le Roux (Bunbury CC). Both catches required diving efforts low to the ground in the deep outfield. By the time Jake Gerrans (Prendiville) had a direct hit run out, the ACC could sense the finish line, eventually dismissing the State Schools all out for 208.

The ACC taking the match result with a 32-run victory and reclaiming the Inter Association shield after the State Schools had retained the shield the last 2 years.

Special thanks to the amazing coaching staff team of 2022. 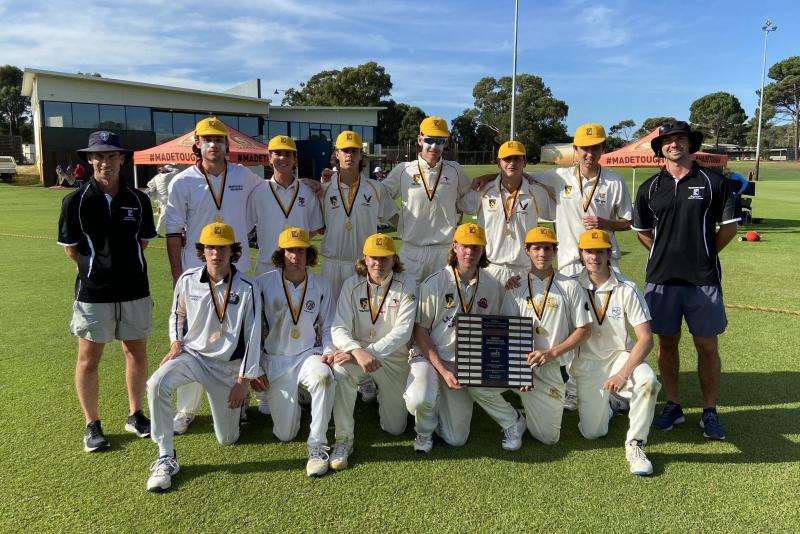 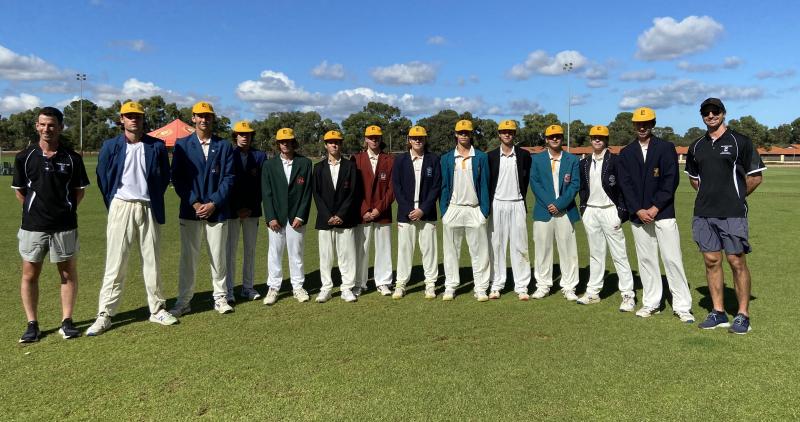 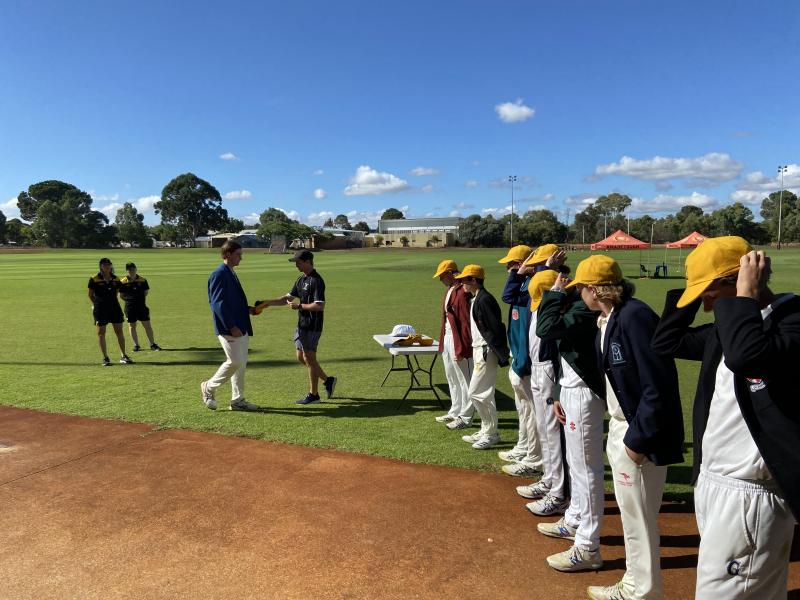 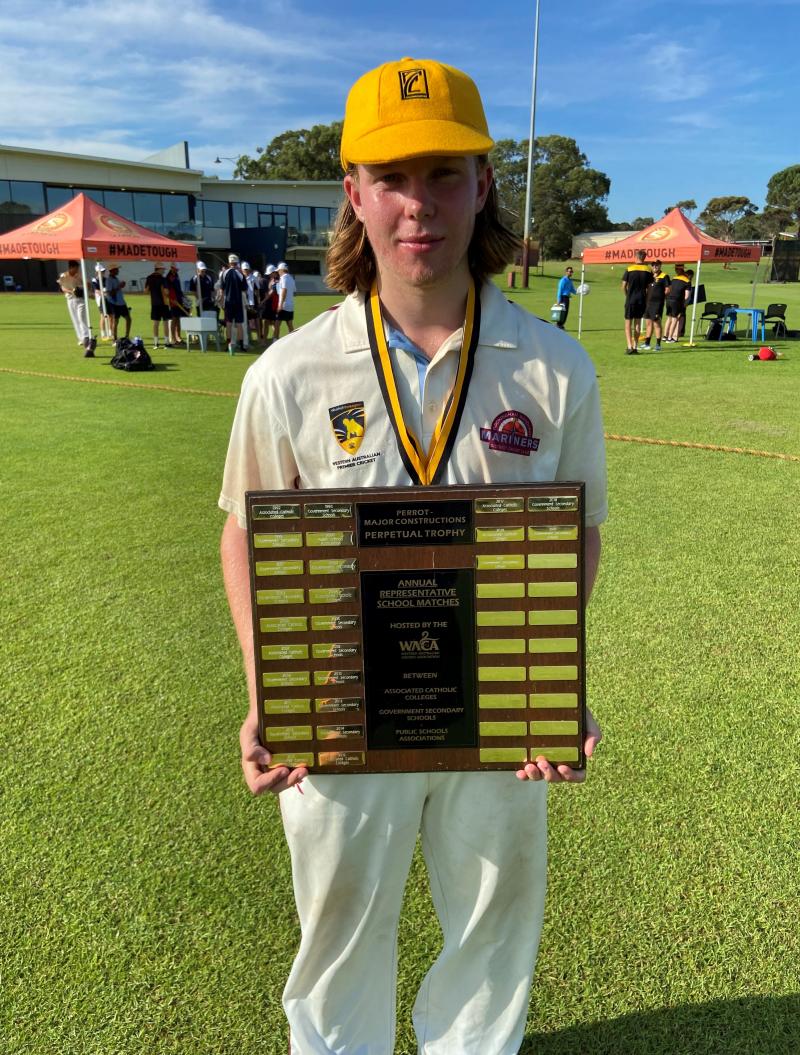