Congratulations to Sacred Heart College who was the winner of the 2021 ACC Virtual Swimming Championship with 705 points, from John XXIII College with 656 points. 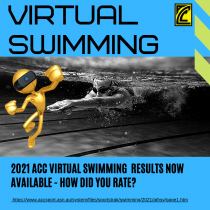 Results from all carnival divisions have been processed using SportsTrak so that the performances of every athlete at every acc school could be compared, regardless of the carnival division.  To score points in the virtual carnival, competitors needed to finish in the first 8 places.  No count backs were used, and all competitors with the same performance received an equal placing.  This is a great opportunity for students to gauge their individual performances against the best performers from all other ACC schools

The top 10 in the combined aggregate for 2021 was Sacred Heart, John XXIII, Mandurah Catholic, CBC Fremantle, Newman, All Saints’, Chisholm, Lake Joondalup, Kennedy and St Mark’s. Lake Joondalup (C Div) , Kennedy (C Div) and St Mark’s (B Div) were the only schools outside of A division to finish in the top 10 schools.  A great effort by CBC Fremantle to finish fourth in the top 10, even though they only have male competitors and don’t compete in 50% of the events. Mandurah Catholic also performed strongly finishing third overall in their first year in A division.

All results are available on the ACC website at http://www.accsport.asn.au/system/files/sportstrak/swimming/2021/swimv/page1.htm

The results of the virtual carnival will now be used to select the ACC Honorary All Stars Athletics team.  To be selected, a swimmer needs to place as one of the best two performers in each event type per age group.  For relays, the top four 100m  and 50m swimmers will be selected.  In medley relays, the top four 50m F/S, Br/S, Bu/F, Ba/S swimmers will be selected. Schools should check the Virtual Carnival results carefully and report any errors to the ACC asap.