The 2022 Competition took place on Sunday 16 October at Gold Netball Centre. As was the case last year, the competition between the three teams was very strong and all matches showcased interesting and quality netball. Within just a few hours spectators witnessed many of the best school-aged netball players in WA in action.

The ACC team had exciting final quarter turn-arounds in both of their matches, where they came from at least a few goals behind to gain the win. In their second match, against IGSSA, the goal that put them in the lead for the first time and gave them their 1 point win, came in the final minute! The excitement of this finish was compounded by the knowledge that with two wins they had won the tournament and would be taking home the cup.

The match results, with winners highlighted, were as follows.

Congratulations and well done to our All Star Netball players of 2022. 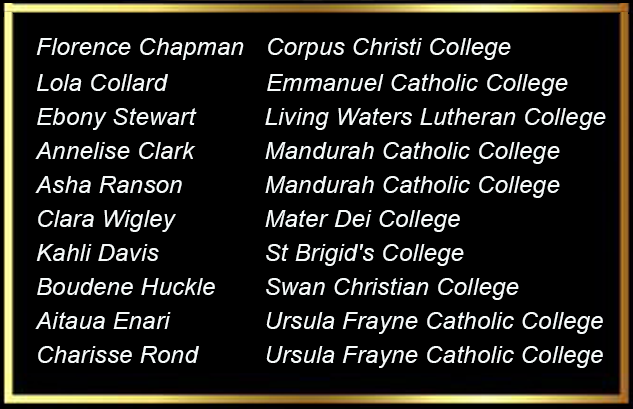 A special mention of the following players:  Lola Collard, who was selected to Captain the team; Clara Wigley, who received the Coach’s Award; and Aitaua Enari, chosen as the tournament MVP.

Acknowledgements also to the players below who have been All Star Netballers for the third year in a row and have therefore achieved an ACC Letters Award, the association’s highest individual accolade:

For giving their time and expertise to the girls who were part of ACC All Stars Netball this year, from all 70 who nominated to the final 10 selected in the team, thanks and appreciation are extended to Coach Wendy Atkinson (Carmel School), Assistant Coach Donna Daniel (Living Waters Lutheran College) and Team Manager Camille Wilson (Kolbe Catholic College).

We are ever grateful to Netball WA, for providing all the officials and for their ongoing support of this annual event. Tracey Swami’s pre-event organisation and management of the Presentation Ceremony made this year’s competition extra special. Thanks also to Jake Trewin, NWA Competitions Coordinator, Beth Harvey, NWA Community General Manager, and Dan Ryan, West Coast Fever Head Coach, for attending and supporting the competition on the day.

It was also lovely to have former ACC representative player, Trinity Rond, attend and assist with the presentations. Trinity is now a West Coast Fever Academy and WAIS athlete.